(US Premiere) NOTHING REALLY HAPPENS (Filmmakers in attendance) Mattress store owner Dave Stimple arrives at the shop one morning, to find the health department has shut him down. Huge bed bugs are cited as the reason. 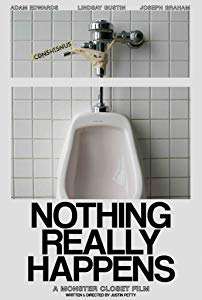 Dave Stimple, an unfocused mattress store owner, is having issues connecting with everyone around him. He arrives at the shop one morning to find the local health and safety people have shut him down. Bugs, huge bed bugs and lots of complaints are cited as the reason. Dave is really confused and his relationships with his wife, friends, and his own humanity seem to be devolving and increasingly distracting anomalies begin to take over his reality. But his issues may not be as internal as they seem.

The War of 1812 has revived violent hostilities between the British and their erstwhile American colonial subjects. The powerful Mohawk nation of the New York region is divided as to whom they should stand by, and so they maintain a position of neutrality. They want no part in the killing – but the killing is coming to them. An impulsive attack on an American encampment has drawn the vengeful attentions of a ragged band of American military renegades, led by the vicious, racist Hezekiah Holt. Oak, Calvin, and their British lover Joshua flee into the woods so familiar to them, but the murderous musketeers on their trail will not be deterred. Not without the spilling of blood.